Well these blog posts are coming thick n fast. Ive had some free time as of late its the economy you no its bugged. So Ive been able to get out and about so much more often. Following form Sundays Workingtons Black Redstart it was Soddy gaps time for a little coverage. I grilled the main pond for a good while as gulls were coming and going, nothing special unfortunatly just Common, Black headed Herring and a Single Lesser black backed Gull. Goosander numbers were up to 55 and the usual suspects were present. So i moved onto the woodland pretty quiet except for a few Long-tailed tits and Redpoll. I moved onto check two tiny pools around the back of Soddy the first had nothing on it but on arriving at the second i noticed a duck that didn't fly, this could be interesting i put my scope down lifted my bins and got a nice surprise in the form of a Female Long-tailed duck, a Site tick woohoo and a good inland bird for Cumbria. Keith arrived as it was actually a lifer for him and we enjoyed this bird for a while.﻿
﻿ 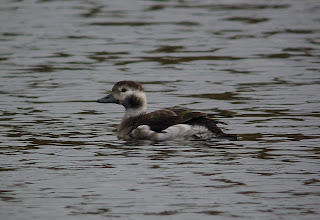 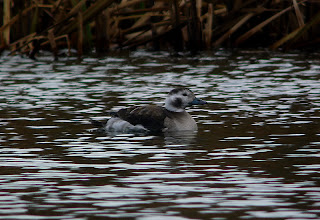 Keith returned to work and i headed for Workington﻿. I had a good look along the beach for the Black Redstarts but it was so windy there was hardly anything to see. I came back to the pier and finished the day with a Short seawatch meeting up with Keith again. A dark Arctic Skua, some Red-throated Divers, Gannets, a female Common Scoter and a group of Kittiwakes were the only things of real note.Still not a bad day.
﻿
Posted by Craig Digiscoper Shaw at 15:51