Well Last night Keith had cooked us a great meal, and it was time to decide what to do Sunday. Stay local or go East. BUT we didn't have to think about it too long. A Greater Yellowlegs had been found at Hauxley NR near Amble in Northumberland. So at half seven we were on our way heading straight for Huxley, now we weren't rushing because we didn't think it would be seen again but seen again it was an by 10am ish we were watching the Greater Yellowlegs in a very busy hide. A brilliant Grey Phalarope was also sat feeding under the legs of the Greater Yellowlegs but wow wow wow and they were showing well, down to 10 feet. I was at the back of the hide so wasn't able to get any pics as a digiscoper and was starting to panic a bit because all the DSLR boys were snapping away in-between the heads and bodies of each other me i was stuck looking at the heads and bodies. Eventually the bird disappeared around the corner and i was able to get to the front as people were leaving the hide. The 2 birds came back and i was able to get some records shots and some video here! 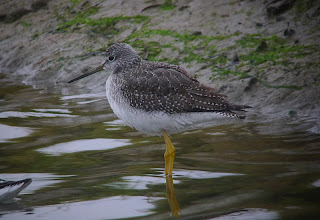 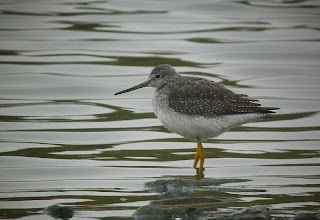 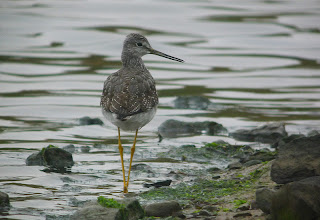 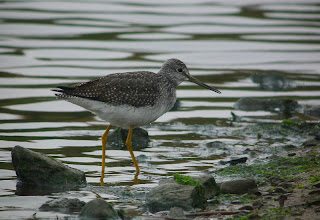 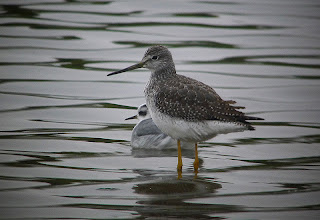 ﻿
The light was poor and the bird more distant than it was before.
After our fill we went to Amble for Brunch and walked around the harbour watching the Eider and a Red-throated diver.
We then moved onto Prestwick Carr for the Short-eared Owl and a reported Great Grey Shrike.
After watching 5 or 6 Shorties Video Here, we were then told the Shrike was a couple of hundred yards up the track so went for a look, i set my scope up randomly on a tree and there it was MAGIC ;-). The views were distant but OK. After watching a few more Owls it was time for home..What a day we had with all target species seen. 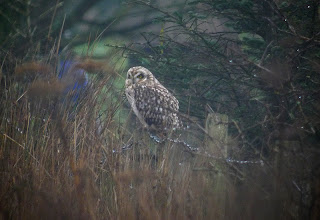 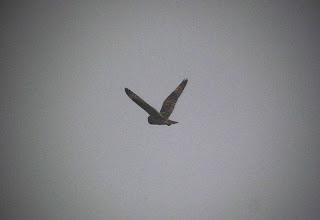