Well today's Challenge for the day was Bewick Swans. a couple had been found by Colin last weekend but not seen since, so as it was a lifer for Keith we decided to give the area a good grilling. We weren't really holding out much hope but you couldn't make this up.
Our first stop was Allonby where Keith had seen Geese and Whoopers all week, in fact so had i but today there were only 29 Whooper Swans normally 53, but 130 Greylag were present. So we then had a good drive around the Silloth to Newton Arlosh area. We noticed a lot of geese at Abbey Town so scanned these Geese. A nice surprise was 44 European Whitefronted geese and a Single Barnacle Goose mixed in with the 800 Pinkfooted geese, many more were hidden by hedges, couldn't find a Bean goose though. So we then moved onto some back roads and ended up spotting 20 odd Swans between Wedholme House and Broom Park Farm, The first bird i spotted was a BEWICK SWAN!!!!! Bingo, no way really. Eventually we realised there was a family of Bewicks 2 juveniles and 2 Adults, this was great as there had only been 2 reported previously. After only a few minutes of me and keith taking pics through the thick hedge a gyrocopter flew over and flushed the lot, we couldn't find them after that although there were a lot of Whooper Swans near Newton Arlosh but they were impossible to check as they were inaccessible from the road to view fully.
We then Coverd Border Marsh where more European Whitefronts were spotted with Groups of 11 and 9 along with 2000 Barnacle Geese 3 Leucistic ones and a handful of Pinks. A Peregrine was on the Marsh. A flock of Small birds flew past but they called just once they sounded like Twite but too brief. Then a Probable Short eared owl dropped into the long grass but again it was so brief it was never seen again, so some real good birds and a couple that got away. Thanks Keith for driving around all those tight lanes... 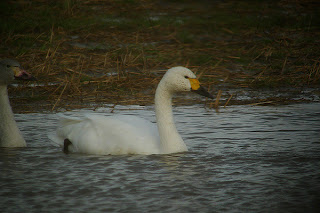 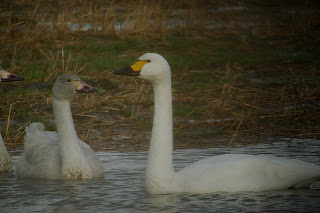 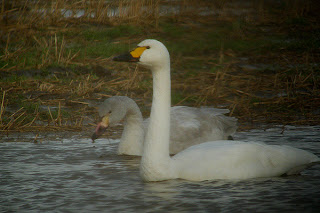 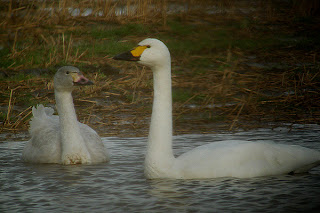 Posted by Craig Digiscoper Shaw at 19:47