Well this was the first day in weeks it had been a nice day in Cumbria so i thought id better make the most of it by having the day out n about the local patch's. Started at Workington nothing on the sea although i didn't do a proper sea watch just sat with the bins. Walked along the beach checking the rocks, just a few Ringed Plover then up n over the hill, Skylarks, House Sparrow, Linnet, Redpoll and Siskin. As i turned to look back at the sea an Adult Med Gull flew along the shore towards Parton, first of the Season and quite early too.
I moved onto Siddick ponds, Reed Warbler was my first notable bird, showing well at times, along side Sedge Warbler, Bullfinch and Common Whitethroat. Chiffchaffs and Willow warblers were singing everywhere. I covered the whole west side but nothing of any real note except a Common Sandpiper and a Wigeon hidden in the reeds.
I finished off by covering Soddy Gap, again very quiet so i went through the Dragonflies and Damselflies. Common Blue and Blue-tailed Dams, and then a 4 Spot Chaser but surprise of the day was an Imm male Black-tailed Skimmer. Then on the way out a second this time an adult male.
I took the opportunity to take a couple of shots of the single Cygnet whilst the sun was out. 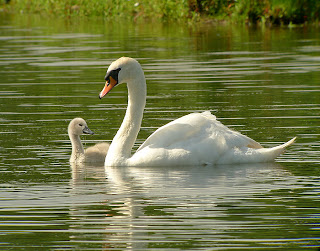 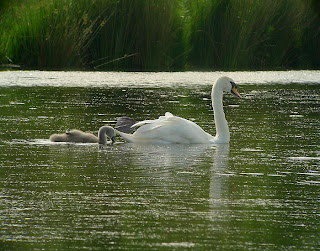 Posted by Craig Digiscoper Shaw at 14:59