Still running a few times a week and as im running around I still manage to see some birds. The first Swifts on the patch for the year, a Common Buzzard and a nice Painted Lady Butterfly.
A 1st Summer Med Gull off COSW along with a House Martin, A Reed Warbler singing from Corton Dis Railtrack. The Terns and Kittiwakes have started with many going south but at distance.
4 Little Tern showed closely.
Now to this weekend, checking the moth trap and this very nice moth was in the trap. Sulphur Tubic. 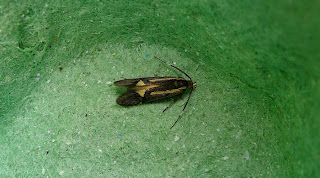 Whilst in the garden a Spoonbill flew north past Lowestoft and probably flew past Corton but I missed it as I raced to the coast. An Osprey followed shortly after but im pretty sure that didn't come through. I ended up spending the rest of the day on patch to very little reward. There was a steady passage of swallows all morning, including at sea. 6 house Martin and 2 sand martin. 1 full sum plum grey plover 2 Tufties, and a Wigeon. A Diver Sp landed on the water.
Swift numbers built up today with a flock of 16 moving north then 8 lingering in the area for the rest of the day. Last bird of the day was a nice Hobby.
Today was another very frustrating day bird wise. At COSW I looked out to see and spotted a bright white bird it was always distant and the sun was very bright but it was clearly a large white winged gull. My conclusion was a 3rd summer or Adult Glaucous Gull it looked large, larger than nearby herring gulls although honestly at that distance and light there no way I could rule out something like a Viking gull or something...So this put me in a bad mood, a good bird on patch and I couldn't id it sufficiently and had to give it up.
There was still a smaller movement of Swallows and Swifts. 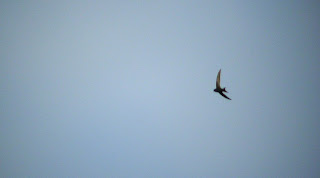 I reached the Dis Railtrack and started looking through the butterflies and insects, finding my very first patch Green Hairstreak. 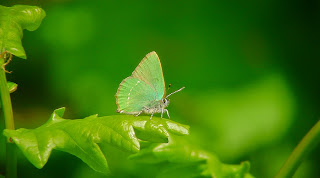 Other bits were Green longhorn Moth. 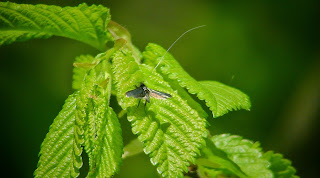 A couple of Damselfies Azure and Large Red. 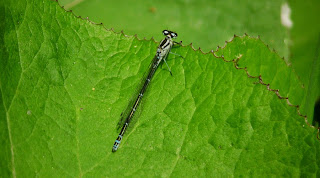 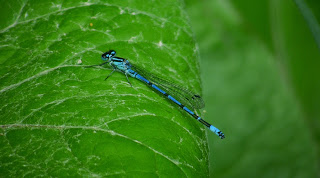 Then I decided to id all the Blue Butterflies id seen today and all week and found they were actually Holly Blue, a lifer for me. 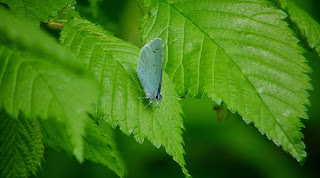 I then took some pics of the young Moorhens just cos there was nowt else to see. 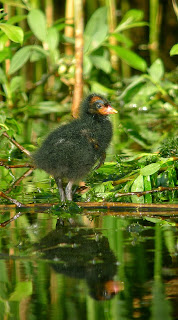 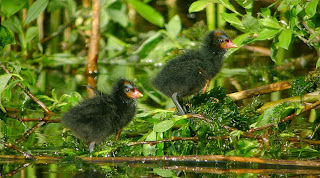 So what can I say no rare birds but good vis mig all weekend.

Posted by Craig Digiscoper Shaw at 15:01