Firstly last night i was playing fetch with the dog in the garden, as it was almost pitch black there must have been a Barn Owl about because on two occasions i got incredible views of the Owl as it flew over my head, i then realized it was attracted to the squeak of Jamie's ball as it sounded like a mouse. Wonderful!!!

It was a late start but Rach n I headed for Northumberland not sure where but i hoped birds would tell us. Well a Juv Barred Warbler turned up at Druridge CP so that was our destination. After a bit of wandering about and checking the dunes at the South end we realised we were in the wrong dune, not a birder in sight, or birds for that matter. Keith who was also in the area then rang with better directions for the north end of the dunes.. So after lunch we headed straight for the correct spot and got plenty of flight views of the Barred Warbler, met up with Keith and Phil too..Eventually i got better views on the deck and in the bush's but it was an illusive bugger so i was lucky to get to see it never mind get these very poor record shots. 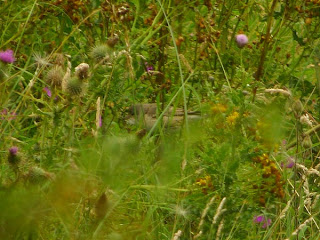 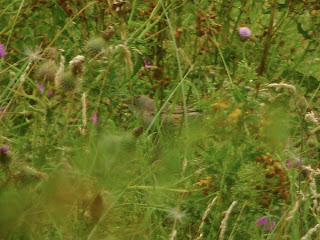 After our fill of this fabulous bird we headed for Cresswell for the Spoonbill and Spotted Redshank, but couldnt find the reported Little Stint or Wood Sandpiper. After this we headed for Whitbiurn Steel to try again for the Bonaparte's Gull but after searching the area and waiting at its favourite spot there was again no sign. Bloody thing. So we called it a day and headed home.

I stopping in at Low Meadows (Soddy Flash) where there were a few more Ducks, now 4 Shoveler, 23 Teal 55 Mallard and a Grey Heron.  At least the Barred Warbler was nice.
Posted by Craig Digiscoper Shaw at 20:41