Well Camped over on Filey Brigg where by late afternoon Keith and I were Seawatching from the point. Not a great deal past and the heat haze was a little tricky. Back at the tent and a Tawny Owl gave us a quick call from the ravine. Next morning it was an early start to check the top scrub for migrants, a few Chiffchaff, Willow Warbler, Goldcrest, and Whitethroat was a bit disappointing. The ravine down to the beach held the same.
The tent was packed away and we were off to Flamborough for a full days Seawatching, but we checked the scrub first picking up only Whinchat and another Whitethroat. 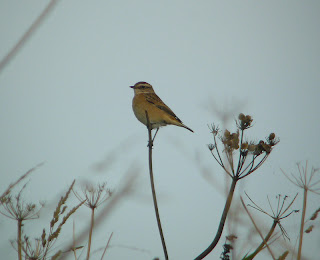 So we started our full on seawatch picking up a juv/1st winter Med Gull plenty of Arctic Skuas, and 9 Red throated Divers Keith ahd a couple of Manxies but still no Poms or long-tails but eventually our target of the day a distant Sooty Shearwater woohooooo﻿. The day continued to be poor with only 2 Juv Peregrine a few Commic Terns, Gannets, Fulmars a Skua Species and more Arctic Skuas to show for our hard effort.
Late on a pod of about 20 Porpoise put on a show for us including an almost pure White one, the only dark was in the fin, amazing looking thing. By 4 o'clock it was time to head back but not before a Stoat put in a brief appearance below us. 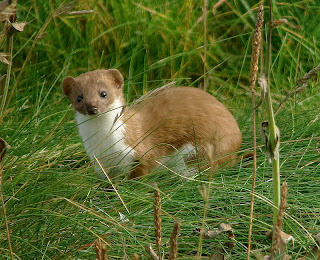 So all in all i cant grumble with 2 year ticks, Whinchat and Sooty and it was good to find the time to do a full on seawatch and not be bored in the first hour like at Workington when there's not even anything to keep you occupied out there, at least at Flamborough there's things continually moving to check.
Posted by Craig Digiscoper Shaw at 08:35