Well the plane landed just after 12 so by the time we got away from the airport it must have been 1 oclock. So I decided we should head through the mountains towards Soller and cover Cuber res. On the way we stopped off at various watch points to see a Booted Eagle (1) and Griffon Vultures (9) with the odd Firecrest, Serin and loads of Sardinian Warblers calling as we drove through the woody areas. Raven seemed everywhere. Just remember click on the pictures to see full size.
It was quite late in the day once we reached Cubar so I didn't expect much due to the heat and tourist but a good afternoon anyway with Whinchat, Stonechat, Kingfisher, Sardinian Warbler more Firecrest, Raven, Griffon Vulture, Northern Wheatear, Goldfinch, Pied and Spotted fly.
The best birds here though were a Black Vulture which flew low over our heads, a pair of singing Blue Rock Thrush and the best bird for me so far were 2 cracking Short toed lark, I had only ever flushed them from fields in Norfolk so it was great to get a better look at them. We headed for our home for the week to check into our hotel at Lago Park, Playa de muro.
Day 2
Very excited to try a new site at s' Albufera marsh the Depuradora. A Great few ponds which form part of the sewage works aka Depuradora. The birds here were great. Good views of Nightingales, Cetti's Warblers, Zitters, Great Reed Warbler, Yellow Wagtails, Reed Warblers, Marsh Harriers, plenty of House Martin, Swallow and Sand Martin. Wood Sandpipers, Green Sandpipers and Common Sandpipers. Hoopoe were everywhere, as were Collard Doves and Woodpigeons. Eventually I managed to spot a juv Woodchat shrike and the best bird so far a lifer in the form of actually seeing a Moustache Warbler... BINGO! 2 Marble Duck put in a brief appearance for us.


Next it was site seeing around the aucanada peninsular or that way anyway, not many birds except a couple of Audouins Gulls and Yellow-legged Gulls and a Shag looking very hot. 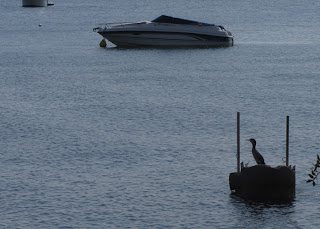 At some fancy La Victoria Church more Firecrest a few Common Crossbills and we could hear Red-legged Partridge. 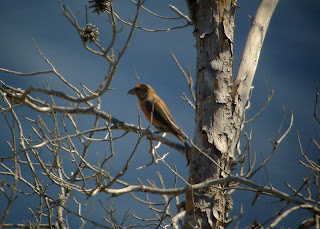 We moved onto the main reserve at s'Albufera, talking to an English couple who said they had seen nothing and it was pretty rubbish...they must have high hopes because I saw a shed load of stuff the highlights being Kentish Plover, Wood sandpiper, Green Sandpiper, Spotted Redshank, Greenshank, Little Stint (3) Night Heron (5), Squacco Heron, Cattle Egret, Little Egret, Kingfisher, Red nobbled Coot, Garganey, Stone Curlew (50+) and eventually a Glossy Ibis.


We finished up back at Depuradora in the dark where I got my first view of the fabulously tiny Scop's Owl sat on a fence in the headlights, this was my second lifer of the day Wooohoo a stunning tiny Owl. 2 Barn Owl were also sat on fence posts on the road back, its amazing how close you can get to owls here in Majorca, there not bothered by cars at all.
We finished back at Playa de Muro for dinner and a few celebratory drinks.

Day 3
This was picked to be the best day I recon, heading down to Salobra de Campos but not before I got up early to cover the local patch behind the hotel a good area I found a couple of years back when stopping here. Today however it was a bit disappointing with just a few birds an Adult Woodchat Shrike being the pick of a few birds. Hay ho don't matter were off down south for loads a birds..
On the trip down Red kite, Hoopoe, and Common Kestrels.

We reached  Salobra de Campos lagoons WOW WOW WOW, why had I not visited this place before, this place had got to be on par with Donana, except Donana the birds are much closer, no matter, the waders were incredible. 300 Kentish Plover,  I had stopped counting at that, 210 Avocet, over 200 Greater Flamingos, love Flamingos, loads of Spotted Redshanks, Black winged Stilts, Dunlin, Little stint, Knot, Grey Plover and Common Redshank, not forgetting good numbers of Red Kite, Marsh Harriers and at least 3 Osprey one with a green ring and transmitter, ill ask Roy when I get home for the info of that one. Well thanks to Roy for getting back to me so quickly, this bird is infact a local bird rung and fitted with a transmitter by the local team in the local area.
Also here good numbers of Yellow Wagtail including a Flava wagtail.

Ok a great start but could this day get any better, coarse it could we left the lagoons and headed for Cap Des Ses Salines and 1km SW of Ses Salines I spotted what looked like a raptor tussling with something so I turned around and what happened next will stay with me forever, a Kestrel tussling with a Bee eater, not just 1 but 40 at least, calling and circling over head showing amazingly well and then eventually landing but briefly. We watched this for a good 45 min before we felt we had better get to out next place before running out of time. 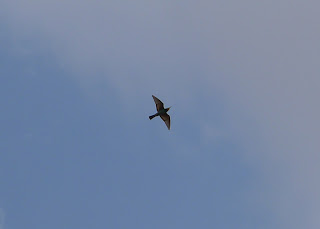 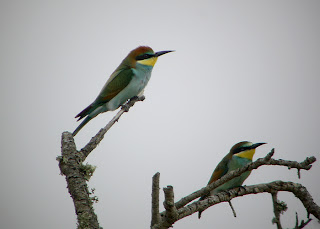 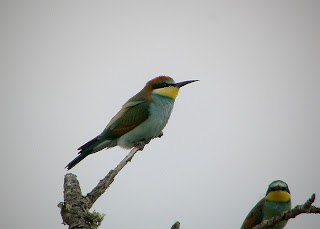 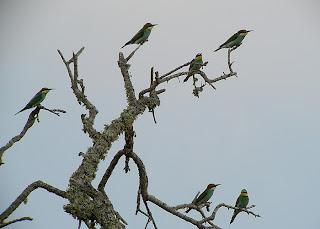 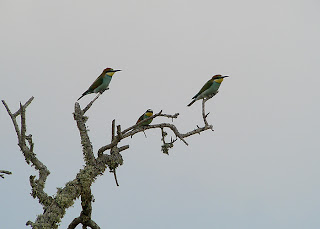 So we arrived at Cap Des Ses Salines where I did a sea watch just for half an hour to pick up 5 Cory's Shearwaters, a couple more Audouins and a Yellow Legged Gull. 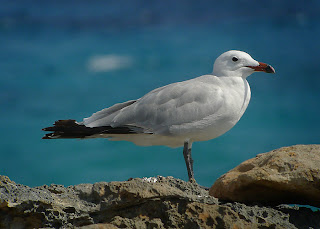 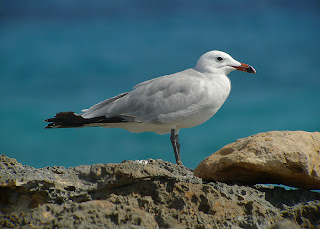 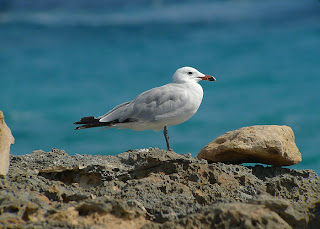 Returning to the car a slush puppy better off and refreshed I could hear another or the same flock of Bee eaters probably heading out to sea on there journey South. On the drive back a dark morph Booted Eagle or was it a Black Kite? (couldn't stop the car to check) finished our day off well. Had to be the best day of the trip so far.

Day 4
Started early at Depuradora, nothing new to add except the smell today was ripe.  So we got to Son Real for opening time 10 oclock, far too late ridiculous really it was really hot by now. Still didn't ruin the day, Good views of Wryneck in fact 3 or 4 Wryneck, 2 Mamora's Warbler or should i say Balearic Warbler as they are now known, semi singing, down at the beach Kentish Plovers showed well as did the Thekla Larks, what a great song, then Superb views of a Juv Woodchat Shrike but then you beauty my second Target species and 3rd lifer of the tip only a bloody Tawny Pipit right under my nose whilst taking a picture of the Shrike.. Amazing truly Amazing, I Love Spain. The rest of the day was spent sight seeing..can it get any better than this... 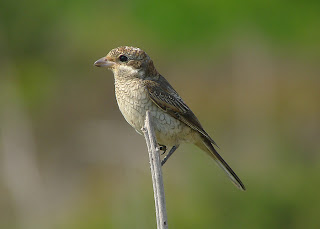 Well the day wasn't over and the night at Depuradora didn't produce any Owls but it did produce great views of a Nightjar again like the Owls it sat on the fence in the headlights of the car for a moment, then flew around the car catching insects attracted by the car lights... Amazing finish to the day.
I need a new target species. Elenoras at Formentor hopefully..

Day 5
So we did manage to get to Formentor Lighthouse today but not before getting 2 Crag Martins at Talaia De Albercutx. Then at Formentor Lighthouse at least 6 Elenoras Falcon all in dark morph but great to watch as they acrobatically tussled in the air. Not a lot else though this time. No Shearwaters. 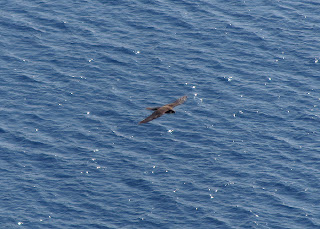 The crowds were massing by now so we made a sharp exit and headed for the cooler quieter mountains around Cuber, not seeing a great deal to be honest. A couple of Giffon Vulture and a 1m Viperine Snake at the damn before Cuber. 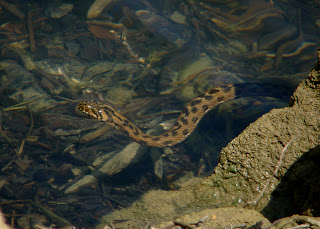 Cuber too was quiet with just a few Common Redstarts, Pied fly, Firecrest 2 Blackcap, Northern Wheatear and a Tawny Pipit to show for it.

On the way home via Santa Maria Del Cami we came across a group of raptors, 2 Booted Eagle dark and light phase, 3 Peregrine and 2 Red Kite.. What a display these put on for us.
We returned to Depuradora which came up trumps again, 6 Marble Duck a cracking juvenile Montagu's Harrier and just as we were leaving a juv/1st winter Golden Oriol shot out a bush. There were plenty of Swallows, house and Sandmartins passing through but still no Swifts or Red Rumped Swallows, bugger.

Hoopoe have been everywhere and are always hard to photograph and these were shot into the sun but I love Hoopoes and so far we have seen loads and loads. 3 in the field I took these from.
Another day quickly ended.. 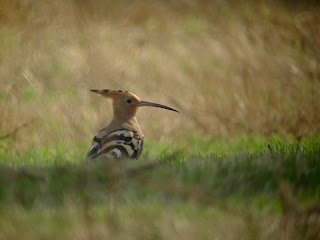 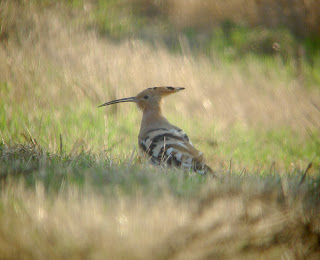 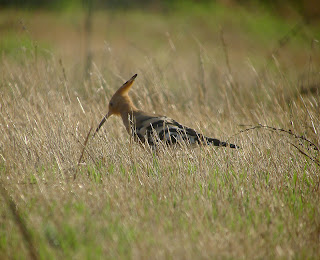 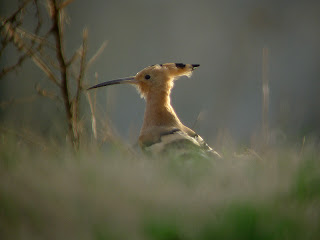 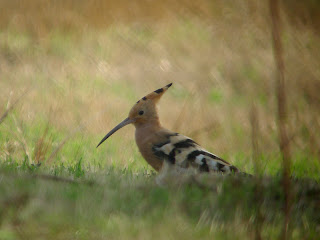 Day 6
This was a day where no birding was supposed to be done so no bins and no scope we headed for the Caves at Encampanet  so we got there did the usual touristy thing then sat on the balcony for dinner and drinks, whilst wait for it.....listening to the bird song, who needs optics. Amazingly I could hear Bee eaters, probably passing over at height, I could also pick up Firecrest, Crossbill, Goldfinch, Greenfinch and Wren whilst all the time being accompanied by 3 or 4 Humming birds Hawk moths.

In the afternoon we headed for Arta Mountains and back on track birding, my first Cirl Buntings of the trip were great. Also here 2 Pale phase Booted Eagles a Peregrine and a  couple of Blue Rock Thrush. That was it of real note here. 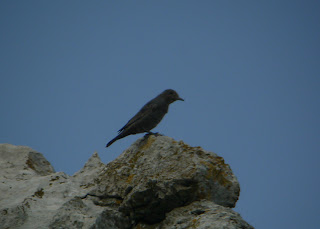 Back at Depuradora where I found the Scops Owl again and saw the usual waders wagtails and warblers so nothing new to really add. Plenty of Hoopoe activity was great though. Back to the hotel early for a change well 6 o'clock early. Last proper day tomorrow.

Day 7
Started early at  Depuradora where a nice trip tick in the form of a Bluethroat. A dark phase Booted Eagle was the only other thing here of note.

The rest of the day was sight seeing until the evening when I dropped Rachel off and headed for s'Albufera main reserve, I spent a good few hours here seeing a Temminick Stint, couple of Little Stint, Garganey again and a Marsh Harrier that took 2 Teal and dropped them into the reeds, I cant believe they were dead and so I recon they just hid in the reeds? Good numbers of the usual stuff including 100 Stone Curlew. A hybrid Spanish x House Sparrow sat on the reeds breifly.


I moved onto Depuradora again for the evening, the Bluethroat showed again and a juv Scops Owl was calling. 50+ Starling was a better number than the 1 I had earlier in the week. A Water Rail finally gave itself up and 2 Woodchat Shrike showed pretty well. A Tree Sparrow was a bit of a surprise. Otherwise the birds were pretty much what I had already seen. Still a great place and always come up trumps. 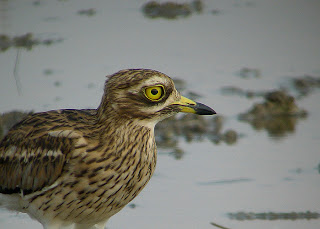 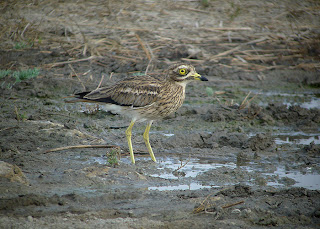 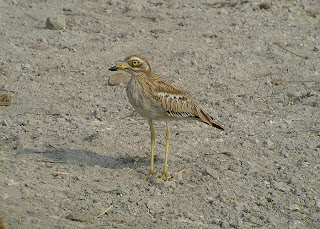 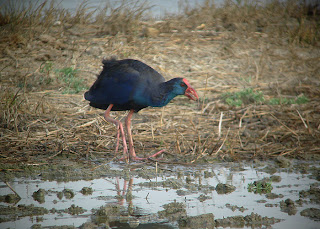 Day 8
Today was hometime boooooo... but i did get an hours birding in at the sewage works at s'Albafura again Wood Sandpiper, LRP, Black Winged Stilts were the main birds. 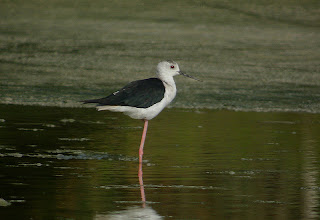 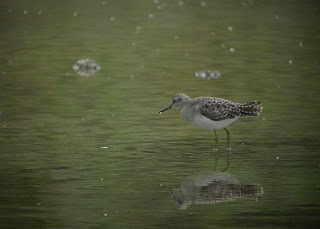 So its been a great week with 122 Species recorded but time to go... for another year at least...

Posted by Craig Digiscoper Shaw at 16:22