Saturday
What a really disappointing weekend, it had so much promise with east winds and rain. It started so well with a patch tick, I flushed a Little Owl from the dis rail track, not the best way to get a patch tick. A Yellow Browed Warbler was another nice bird. Unfortunately it went down hill drastically after this. A couple of Corys Shearwater flew past Southwold so I stopped wasting my time looking for migrants in the bush's and headed straight to the coast.
News came out that the Corys was now of Lowestoft but it had now followed a fishing boat out to see and not past Corton where I was watching from. GRRRRRRRRRRRRRRRRRRRRRRRRRRRRRRRRRRRRRRRRRRRRRRRRRRRRRRRRRRRRR
It Would have been a lifer. A little while later a Leach's petrel flew north past Lowestoft, again it never came past me or I bloody missed it, P*ss off, now I was getting cross.
Birds I did manage to see were plenty of Auks both Guillemots and Razorbills. Red Throated divers were the commonest sea bird. Common Scoter, Wigeon, Teal, 3 Red Breasted Mergansers and a Great Crested Grebe were the best birds on the watch. Id had enough so headed home checking the bush's on the way, a Redwing feeding North of Corton Church was it really.

Sunday had to be better, afraid not, Started at 7am still in the dark sea watching. Thought my luck had changed when an Eider Flew past thinking it was small and dumpy put news out of a possible Female King Eider so people further south could at least have a look. Luckily the guys in Lowestoft were sea watching but it was just a Common Eider (oh Bollocks) More Divers passed and more auks too. Skylarks were coming in off including a group of 12. Arctic Skua was the only other decent bird with many Brent Geese.
Rob then found a Great Grey shrike at Lowestoft so after another half hour sea watching I decided I would cut my loses and go take a look. so hurriedly walked home picking out a calling YB Warbler in the Vicarage garden. Picked up the car and headed for Lowestoft and yes you guessed it missed the shrike by a couple of Mins.  Had a good look around the industrial site but all I could find were many many Goldcrests and a Wheatear. 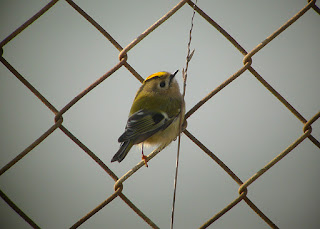 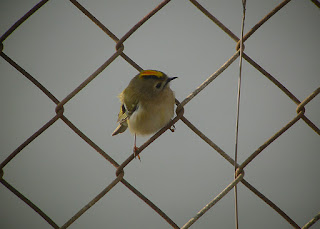 Headed for the caravan park for a long staying Snow bunting and yup couldn't find that either. Another Wheatear though. Headed back to patch to see nothing. So had lunch watched the Grand Prix then headed out hoping my luck would change just a little.
Many birds moving again now Redwings maybe 50+ Siskin and loads of Goldcrest. a Couple of flyover Bramblings finished off my day. I did do a short Seawatch but missed a Shortie going south so that was the last straw, I'm going home in a huff.  What a load of rubbish. Fruastrated and Disappointed...
Lets hope my next trip out is a better one....


Posted by Craig Digiscoper Shaw at 17:42