Well I was on Facebook, when my real good mates the Asbo started talking about a Common Yellowthroat, I thought what the hells one of them so Googled it and though WOW that's stunning, well the adults are but as no news was still forthcoming at this point other than Common Yellowthroat in Wales i wasnt to fussed and though hope its a hoax or gone. Its not often we get any American Warblers this time of year that are adults so I looked at a 1st Winter jobbie and even that looked stunning. I thought Bugger, that would be nice to see but too far for me theres no way.
So I texted Keith jokingly saying its his turn to drive, Gwent tomorrow, he said wheres that I said South Wales he said no way lol understandably. I wasn't going to go alone and never expected to go but I asked the wife and she said.......YES OK ...What!!!! Did you say yes. YUP woohoooo.
So Friday comes I had the day off and Rach had to do half day. News by now had broke. 1st Winter Male Common Yellowthroat Rhiwderin Nenwport. So we left by 12-30 but as I new it would take an age to get there and we wouldn't make it till after dark I was more relaxed and jammed in on a Single Hawfinch at Sizergh castle. A Sandwich and drink were in order too as we had missed dinner.
The Traffic all the way down was murder especially around Birmingham but by 7pm we were checking in to our Ibis Hotel, we had the dog and so I new this hotel would accept them free of Charge. After checking in we had a lovely carvery at Toby carvey across the road.
Next morning I was out before first light Rachel dropped me off on site and went to do her own thing with the dog, I spent the next 4 hours in the pissing rain with some of me mates the Asbos waiting for this bird. The weather was bad rain and windy so the bird was a no show. My other plan was to nip down to Hampshire for a long staying Spanish Sparrow and Dark-eyed junco. If these weren't here I may not have traveled all this way for 1 bird. The roads were once again slow, bloody crappy slow middle lane road hoggers, these people need there cars taking off em, don't they no I'm on a twitch.
By the time we reached the Sparrow it was mid afternoon and the rain was still pissing down. I got to Calshot and got to see the Spanish Sparrow straight away as there were a couple of birders and the house owner already there. The down side was the bird was tucked into the hedge with its head firmly tucked into its wing for virtually the whole time. Even a bloke walking up to the hedge didn't move it... It did move a little at times. Disappointing really but a first for me all the same. Time was getting on and seeing as I needed to get on to see the Dark-eyed junco which was illusive at best on wet windy days apparently I needed to give this as much chance as possible. On arriving it hadn't been seen all day except once briefly visiting seed. This didn't bode well. A few people had now arrived and hard watching was needed. Eventually 1 fella spotted it on the furthest fallen tree but no-one else got on it.. Noooooo but at least its in the area. 10 min later a young fella walked up to a mound area a few yards further up and shouted he'd got it we all rushed onto the bank and sure enough there it was, in its full glory a cracking bird another lifer.... Unfortunately it was still peeing it down and the weather was getting me down I couldn't get any decent pics of anything. 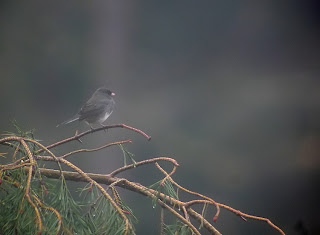 A pair of Crossbill landed in the tree which was a nice surprise. 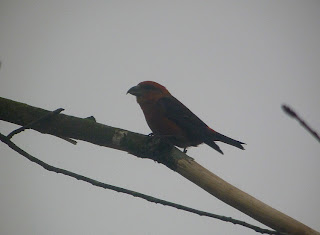 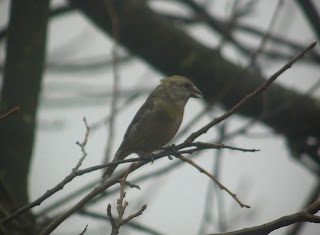 It was getting dark and I wanted another go at the sparrow but when we arrived it had already gone to roost. The original plan was to stop around Southampton for the night but seeing as id dipped the Yellowthroat  and it had turned up later when the sun had come out it  meant we had to head back to Cardiff and back to the same Ibis hotel. So a 2 hour drive back it was time to get some food and bed...
So come Sunday Rach was on strike and she wasn't getting up at the crack of dawn again so we didn't arrive at the Yellowthroat Site before 8am. Rach dropped me off again and I dashed up the hill as the bird was on show wohoooo it was a beauty of a day and a beauty of a bird What a superb Lifer.. .. I Watched this bird for some time as it dashed in and out of the hedge illusive at times and never stopped in the open long enough for decent Digiscoped shots so I had to come away happy with the shots I got. Met few more Facebook buddies and enjoyed the bird some more till rach picked me up at about 11am. 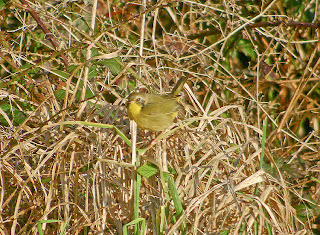 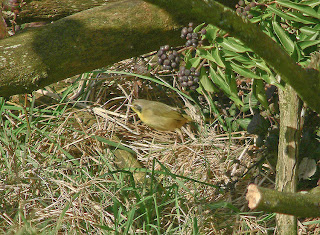 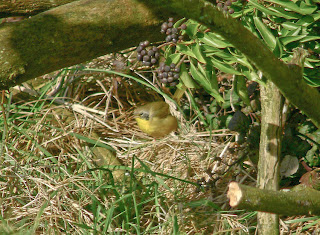 There had been a handful of records in the UK this being the 10th, the latest being Cornwall 2006 when a bird was found Dead.
We had a long journey home so headed of and got back just before 5 so I headed off Owling at Derwent forest where I had great views of 5 Short-eared Owls. 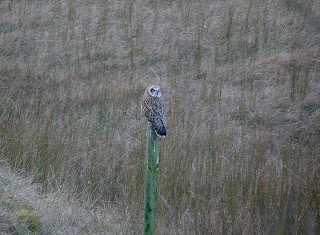 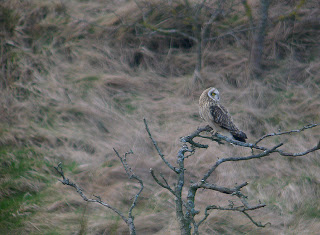 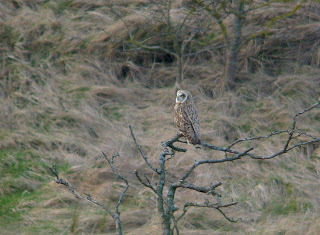 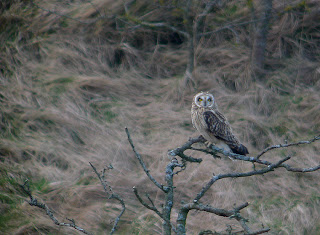 Great finish to a wet but successful weekend away down souff. (south)
Thanks Rach
Posted by Craig Digiscoper Shaw at 21:20