Well who said Friday the 13th is unlucky, certainly not for me today. I managed to get all my jobs finished at work and decided id carry on up the Motorway to Kirk Loch for my 4th Attempt at seeing the over wintering American Wigeon. When i arrived I finally found the Drake American Wigeon, and what a relief.
The sun was out but in the wrong direction so the pics were awful. 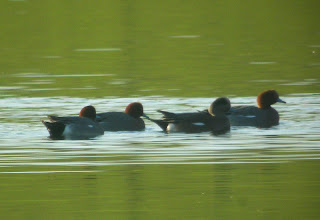 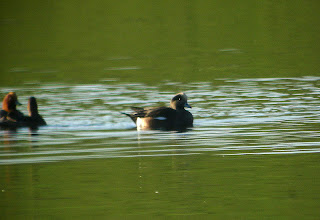 I then returned to Cumbria via the Solway stopping at Sandsfield to have a look through the Geese. First bird i picked up however was a Cracking Male Hen Harrier. There was a birder further down the track so went to show him the Harrier.  We were looking through the Geese when i started to look through the Gulls, not sure why they were a long way off but i did manage to find a Juv Glaucous Gull an amazing record for Cumbria, I managed to get John Poland (the other birder) onto the bird before it disappeared when two canoeist went past. Couldn't find the Ross's Goose again unfortunatly.
I then heard about an Iceland Gull that had been found at Maryport this morning so headed straight back to there. Managed to get before dark and found the Juv Iceland Gull from Crosscanoby, a two white winger day in Cumbria... unheard off!!!!!  I managed to get Keith onto his latest lifer, wicked...
Just as you think this day couldnt get better, I made my way to Derwent Forest the old Ammunition dump withing walking distance of Soddy Gap. Keith had found a good Owl spot so met him there...
Amazingly we had 5 Short-eared Owl with 3 heading towards Soddy Gap, 2 Barn Owls, 2 Tawny Owls and 2 Woodcock... amazing site!!!! by 6 o'clock it was pitch black and time for home..What an amazing afternoon.
Posted by Craig Digiscoper Shaw at 19:11