Well Happy new year readers. My birding day started off well with Keith and I heading for South Cumbria and North Lancashire toting up 76 species. Started at Whinfell Tarn for Keiths 1st lifer of the Year with Red-headed Smew and a few year ticks to boot. Not the best weather for photography. 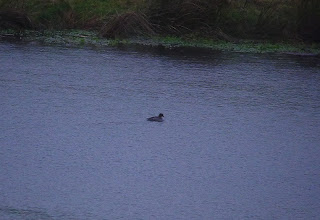 We were passing Seizergh Castle but no Hawfinchs. Finally got to Leighton Moss where a Marsh Harrier was showing well, then the Glossy Ibis was where i left it last week and made a great early edition to the year list. 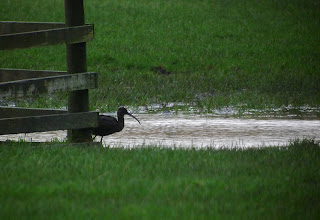 I checked my phone to see 3 Snow Geese had flew over Leighton Moss and hour earlier....bugger but arriving at the Eric Morecambe hide we noticed they were here on the Marsh although with Greylags oh dear. erm Snow goose of unknown origin then ;-).

I noticed through the rain sodden glass hide windows what looked to be a Spotted Redshank, but it disappeared without a trace....for now ;-) Usual suspects from the hides. Checking the birds from the railway produced the much looked for Spotted Redshank..Bingo!
We had lunch in the cafe and moved onto the main reserve not seeing an awful lot but Marsh tit and Little Egret being the pick of the bunch. 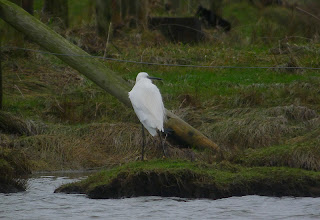 We finished of at Heysham where a Glaucous Gull had been reported but there was no sign this evening, But a nice selection of other stuff including Shag, Guillemot, Adult Med Gull, Red breasted Merganser and lots of Kittiwakes. It was now time for Home....
Posted by Craig Digiscoper Shaw at 18:16