Well i was on my way to work and had a quick stop off overlooking Bass lake from a fell road on Winlatter pass, in the dark i could just about see the lone Great White Egret on Bass lake. Onwards to Penrith where i got a phone call cancelling a job i was doing today so i continued northwards to Lochmaben to look for the mix of geese that had been around. firstly had a look at Castle loch for a mysterious American Wigeon that Stringer and photo faker Brian Henderson had been reported, he apparently pretended to photograph a ring-billed gull in DnG which people are saying were taken out of county, so seems hes tapped in the head. So Surprise surprise no sign. So then i moved onto Heck when i found the group of geese and Swans, mainly Mute swans, 3 Whooper swans, Canada's and Greylags. No sign of any Bean Geese or Whitefronts. Just as i left to have a look around 2 Whitefronts flew in but id have a better look later. I couldn't find any geese so returned to Heck where there were many more Pinkfooted Geese on Display including the adult and Juv European Whitefronted Geese. After a good while i finally picked up the 4 Tundra Bean geese so was mighty relieved, they had been here all the time although hidden in the long uncut crop. A neck collar Pinkfooted goose was noted while there, Silver PKT. I then had another quick look for American Wigeon on both Castle Loch and Kirk Loch, not sure why i'm bothering its a hoax anyway ;-) I then returned for home. 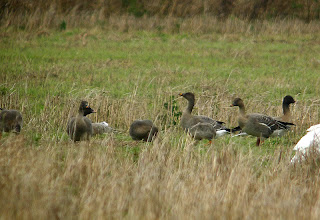 Posted by Craig Digiscoper Shaw at 16:13