Well the title says it all really on MY patch Corton new Sewage Works there's been up to 10 Black Darters on the small pond a VERY RARE Dragon for Suffolk there were less than half a dozen previous county records.  So today I nipped down and saw at least 3. Willow Emerald was also noted but im yet to catch up with one.

Then I moved over to The old sewage works where I watched a Patch tick come in off the sea a cracking female Marsh Harrier... but that was it really.

Going back to Black Darters in Cumbria this year a site had roughly a million Black Darters. Certainly clouds of them.. 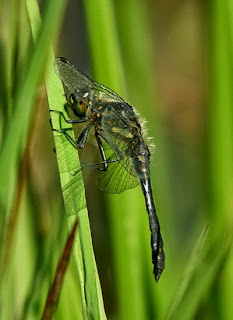 Posted by Craig Digiscoper Shaw at 16:51